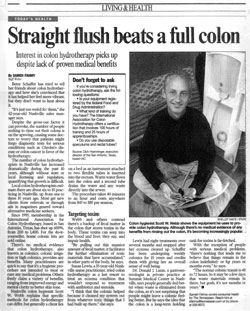 Colon hygienist Scott W. Webb shows the equipment he uses to provide colon hydrotherapy. Although there’s no medical evidence of any benefits from rinsing out the colon, it’s becoming increasingly popular.

Betsy Schaffer has tried to tell her friends about colon hydrother­apy and how she’s convinced that it has helped her feel more vibrant, but they don’t want to hear about it.

“It’s just too weird for them,” the 42-year-old Nashville sales man­ager says.

Despite the gross-out factor it can provoke, the number of people seeking to rinse out their colons is on the upswing, causing some doc­tors to worry that patients might forgo diagnostic tests for serious conditions such as Chrohn’s dis­ease or colon cancer in favor of the hydrotherapy.

The number of colon hydrother­apists in Nashville has increased dramatically during the past 10 years, although without state or local licensing and regulation, quantifying that growth is difficult.

Local colon hydrotherapists esti­mate there are about six to 10 prac­ticing in Nashville, up from one to three 10 years ago. Most get new clients from referrals or through ads in magazines geared toward alternative medicine seekers.

Since 1995, membership in the International Association for Colon Hydrotherapy, based in San Antonio, Texas, has shot up 600%, from 200 to 1,400. For the do-it-yourselfer, home colonic kits are sold online.

There’s no medical evidence that colon hydrotherapy, also known as colonics, colonic irriga­tion or high colonics, provides any benefits. Many practitioners are quick to say that it’s a hygienic pro­cedure not intended to treat or cure any medical problems. Others freely claim a variety of benefits, ranging from improved energy and mental clarity to better skin tone.

Nashville colon hygienist Scott W. Webb explains that specific methods for colon hydrotherapy can differ, but generally a client lies on a bed as an instrument attached to two flexible tubes is inserted into the rectum. Warm water flows into the colon and a second tube drains the water and any waste directly into the sewer.

Is your equipment registered by the federal Food and Drug Administration?

What kind of training do you have? The International Association for Colon Hydrotherapy offers a certification that involves 100 hours of training and 25 hours of apprenticeships.

Do you use disposable speculums and rectal tubes?

The procedure takes 40 minutes to an hour and costs anywhere from $45 to $85 per session.

Webb and others contend there’s a backup of fecal matter in the colon that stores toxins in the body. These toxins can seep into the blood and liver, they say, and impair health.

“By pulling out this massive amount of fecal matter, it facilitates the further elimination of toxic materials that have accumulated,” in other parts of the body, he says.
Susan Lewis, a 35-year-old Nashville nurse practitioner, tried colon hydrotherapy as a last resort to treat an eczema condition that wouldn’t respond to treatment with antibiotics and steroids.

“I think that the colonic helped because it cleaned my system out from whatever toxic things that I had built up there,” she says.

Lewis had eight treatments over several months and stopped after her eczema cleared up. Schaffer has been undergoing weekly colonics for 10 years and credits them with giving her an overall sense of well being.

Dr. Donald J. Lazas, a gastroenterologist in private practice at Summit Medical Center in Nashville, says people generally feel better when waste is eliminated from the colon, so it’s not surprising that people might leave a colonic feeling better. But he says the idea that the colon is a long-term holding tank for toxins is far-fetched.

With the exception of people with serious medical problems, “there’s nothing that leads me to believe that things remain in the colon indefinitely or for years or months even,” he says.

“The normal colonic transit is 48 to 72 hours. So it may be a few days that waste materials remain in there, but gosh, it’s not months or years.”

Sameh Fahmy covers consumer health for The Tennessean. Reach him at [email protected] or by phone at 259-8072.